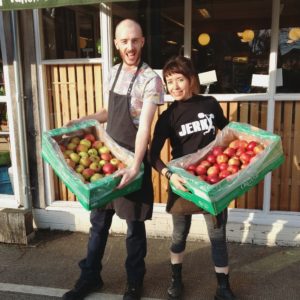 As October speeds ahead under glorious sunny skies we look forward this Saturday to Apple Day, our annual celebration of the variety, range and breadth of flavour that the UK apple season has to offer.

From Herefordshire to Kent, Sussex to Ormskirk, we’ll be representing over 20 varieties of fruit from 7 different orchards. Expect unusual heritage specimens such as the tropically sweet Pitmastons Pineapple, aromatic Rosemary Russets and crunchy Laxtons Superb alongside blockbuster favourites such as Cox, Topaz and Red Devils. We’ll be sampling all day long as well as baking apple treats at the deli counter and preparing a few apple salads too for some savoury recipe ideas.

With so much variety on offer now’s the time to be baking apple desserts – why not try a tarte tatin as an impressive Sunday roast finale or throw some quince into your apple pie or crumble to add beautiful colour and contrast.

Pears deserve a mention too, we’ll have several varieties available during the week. The conference are eating particularly well at the moment – sweet, juicy and delicately perfumed.

Elsewhere in the shop we have the first UK celeriac, delicious cooked into a mash or gratin or thinly sliced raw in a salad. The UK range has been holding out very well so far owing to the high temperatures but expect leafy greens to start dropping off soon as we look towards France for the winter months…