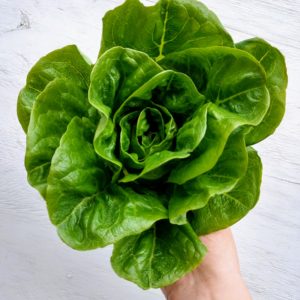 he last two weeks saw delayed deliveries due to some trickier weather conditions and consequently gaps in our range, both on European and UK lines, but we’re back to normal this week! There are reports that the Beast from the East caused further problems, namely to the UK asparagus and new potato crops meaning they may not be ready as early as usual.

This week we would like to highlight little gem lettuces, grown by Duncan Gielty in Lancashire in unheated tunnels. They are crisp and juicy, keep well and offer a good alternative to French open lettuces. Salad leaves are a lovely mix with lots of purslane. Also great are Dutch pears (amazing flavour) and Spanish raspberries.

Since the end of the UK season, apples continue to be difficult to source as Europe is almost empty.  Southern Hemisphere (Chile / Argentina) are also appearing on the market. We prefer to hold off with those as long as possible, but this is a crazy year for apples!

Coriander from Europe has come to end. Duncan Gielty needs some sun before we can start with his tunnel crop as his plants are still tiny. In the meantime we aim to have other options such as mint and dill.

Francis Sampson (Cornwall) has limited availability on cauliflowers this week, but a few should be trickling through until he kicks back in with full force next week.