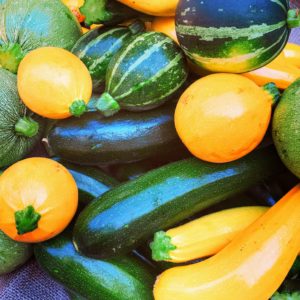 Without wanting to put a downer on the gorgeous weather, we unfortunately have to bring to your attention the desperate situation that our growers are in – also widely being reported by national news outlets. The recent heatwave, combined with no significant rainfall for months, has created enormous problems for farmers. Organically managed soil can be amazingly resilient, its capacity to hold water and allow crops the ability to draw it up from lower down can be remarkable, but obviously there is a limit. Establishing crops is the biggest challenge and the weeds have evolved to manage on a lot less water. Of course irrigation is the answer but with the soil as dry as it is and the sun so hot its tough work moving irrigation equipment around all the crops and on top of that there is harvesting to be done. Some growers don’t even irrigate some crops in the field, since in the past they have managed without. After a very brief start to the UK Broccoli season supply is really tight, it’s a very sensitive crop in these conditions. We need a decent amount of rain soon or we will see difficulty in supply of crops later in the season too.

Abundant this week: courgettes (all from North-West growers), broad beans (mainstay of the supply from Ward and Thompson in The Fylde) and peppery rocket from Libby Flintoff (Lancs).

From Europe: apricot flavour has improved lots! Also look out for Charentais melons from France and Spain.