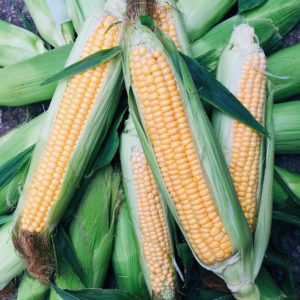 The display is an explosion of late summer colour this week with beautiful, fresh arrivals from across the UK. Defying the Mancunian grey skies are these sunshine yellow sweetcorn on the cob, one of the few crops to have thrived in the scorching temperatures of the last few months and in abundant supply all week. We’re roasting or grilling them on the cob to be eaten with both hands or mixing them with black beans and coriander for a crowd-pleasing taco filling.

Broccoli has been struggling to grow in recent weeks, to the dismay of many of our farmers.  After a shortage during the drought however, a little rainfall has resulted in all the heads being ready to pick at once. We’ve got a tremendous supply all week from the Wasses up in Yorkshire as well as Duncan Gielty in Lancashire.

The UK apple season starts this week, which is earlier than we’d expect in a typical year. Reports from the orchards speak of mixed fortunes for this year’s crop; lots of sunshine means a high-sugar content from the off and early variety Discovery have got an excellent balance of tartness and sweetness. Older fruit trees with more developed roots fared better as their shallow roots were able to access more moisture but dwarf-root-stock trees did not fare as well in the heat of summer and some growers are speaking of smaller fruits as a result. Also owing to the extended heatwave, the worst plague of wasps in recent years has seen off nearly all of the Discovery fruits of longtime supplier Windmill Organics down in Oxfordshire, let’s hope the other varieties survive.

Psychedelic Romanesco cauliflowers and red and green pointed peppers from Duncan Gielty in Ormskirk are all deserving of special mention. Lovage, oregano, thyme, sage and tarragon from Pam Bowers in Lincolnshire are all smelling fantastic. Last but not least, UK plums, greengages and damsons are hitting their peak – the perfect mid afternoon snack or a more unusual jamming fruit, enjoy them while they last.