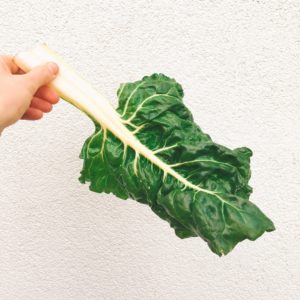 Friday sees the first pallet of the season from Cornish grower Francis Sampson down in Penzance. Francis grows on two adjacent pieces of land right at the tip of Cornwall near Lands End. One of the areas is very exposed, open to the regular south-westerly winds but – crucially – this area remains almost entirely frost free. The value of such mild coastal strips becomes apparent at this time of year when production of cauliflowers, spring greens, savoys and purple sprouting broccoli is difficult elsewhere. We would much rather sell Cornish produce than the often cheaper, but energy-hungry Spanish equivalents.

We can expect lots of good stuff from Francis over the coming months who has reported a good growing season with high yields and very large cauliflowers! We’ll begin with kales, cabbages and caulis and await eagerly the start of his purple sprouting broccoli in a few weeks time.

While spinach from the UK is coming to an end for the year we’ve a great selection of different chards to fill  their space – there’s Swiss from Pam Bowers at Strawberry Fields in Lincolnshire, rainbow form Libby Flintoff in Preston and baby red from Duncan Gielty in Lancashire. Treat it slightly different to spinach – separate the stalks from the leaves, chop them finely and fry or braise for a few minutes to soften. The leaves require very little cooking and can also be eaten raw.

We’re starting on tundra cabbages from the Wasses in Yorkshire as well as their crop of Brussels sprouts. Butternuts, pumpkins and squashes remain in abundance too, we recommend the local Harlequin variety from Alan Hewitt in Dunham Massey.

Peruvian ginger is really exceptional of late – beautiful large fingers and full of fiery punch. Chop finely and boil in water for a warming cup of tea. And If you plan to make homemade cranberry sauce for Christmas, now’s the time to get them – remember the season ends at the end of November.