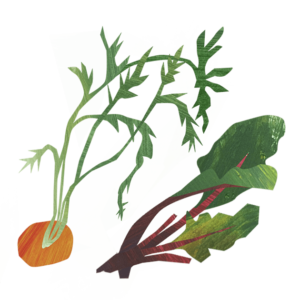 Get the most out of your veg…

Stalks, outer leaves and leafy tops of vegetables are packed with nutrition and flavour, and should not just be relegated to your compost bin.  You pay for most veg by weight, so it makes sense to eat as much of it as possible.  Here are some ideas of what to do with them.

Cut off any fibrous ends or tough outers; cook them just as you would the florets, slice into rounds and stir fry, add whole stems to soup before blending, cut into batons and eat raw with dips, shred raw into salads, blend with lemon & garlic to make a pesto, roast and add to pasta.  Treat them as you would asparagus (which is also a stem!).

Use as you would cabbage leaves – they are after all part of the same brassica family.  Shred and stir fry, sauté with wholegrain mustard and add to mashed potato, chop the smaller, newer leaves into salads, dice into soups, fry-up with potatoes for bubble & squeak.

As flavoursome as the stems or root; chopped finely they can be used as you would parsley, as a garnish or to flavour soups and stocks.  Basically, whatever you’re using the celery or celeriac for, use the whole thing, tops and all.

Some debate about whether you can eat them, but they are edible and vitamin rich.  High potassium content can make them bitter, so mix with sweet vegetables or salads, chop them into a vinaigrette with fruit syrup or steep with boiling water for a delicious, cleansing tea. Use them only when they’re fresh – old ones will taste bitter – and if you’re storing carrots in the fridge, remove the tops first as they will sap moisture from the carrot causing it to wilt prematurely.

Use up as soon as you can as they’ll not keep as long as the beetroot itself. Cook as you would spinach; steam or sauté with olive oil, chilli, garlic & pine nuts, add to soups, use the younger leaves in a salad.

Known as turnip tops or turnip greens, they resemble mustard greens in flavour and contain 4X the calcium of cabbage.  Leaves from very large turnips will be too old and bitter, so chose small ones. Cut off and discard tough stems and discoloured leaves and (again), treat as spinach; blanch briefly and sauté with olive oil, or add to braised turnip root.

The feathery, bright-green fennel fronds and stalks are a great way to add flavour to your dish, as you would with any other fresh herb, they have sweet aromatic liquorice-like flavour.  Toss into pasta, add to risottos, stews or roasted veg.

There’s no need to cut off the green upper leaves, unless they’re tough or discoloured (in which case use them to flavour stock).  Use as you would the rest of the vegetable. Thicker green bits take a little longer to soften than the whiter stuff, so add them to the pot a few minutes early.